What is striking about Isca Greenfield-Sanders’s “Pinelawn Pools” series (all works 2006) is the sharp juxtaposition, in several of the paintings, of luminous blue swimming pool and dark surrounding shadow. Both are expansive, however self-contained the pool and uncontainable the shade. In Swimming Pool Landscape, the latter threatens to engulf the former, and with it the people around the pool. They’re veritably “living on the edge,” trapped between two pits, as it were, one neatly geometrical, the other abysmal and spreading like a cancer. The picture needs only a pendulum to turn it into something out of Edgar Allan Poe.

But of course gloom is not an acknowledged part of American suburban life. Why else move to the periphery except to escape the dreariness and anonymity of a city? Greenfield-Sanders’s paintings are gothic horror tales in disguise: Their secret terror is the suburbs’ inescapable ordinariness. For all their plainness-that is, their deceptively naive “realism” (each canvas is loosely based on an anonymous family photograph that has been computer-“enhanced” to emphasize its film-still-like formal properties)-they are powerfully emotional allegories of the banality of and complacency of everyday life on the outskirts. The pool is the hollow center of mindless sociality, suggesting the shallowness and superficiality of it all-the Nothingness that the black void finally brings into the open. In Greenfield-Sanders’s rendering, the suburbs are outwardly cozy and peaceful, but utterly empty at the core.

At least since Eric Fischl-who also came into his own with a pool picture (Sleepwalker, 1979, a scene of a boy masturbating in a wading pool)-“gothic” morbidity has moved out of Sherwood Anderson’s Midwest and William Faulkner’s South into the American main-stream. Greenfield-Sanders’s pictures are much more placid and understated, both in their handling and imagery, than Fischl’s, but they make the same point: There’s something rotten in the suburbs. There’s no immature Hamlet in her pictures, but there is the eponymous figure in Orange Suit Bather, who is just as emotionally isolated. The thought of committing suicide- “to be or not to be” -doesn’t occur to her, because she is, in effect, already dead. She’s a tiny token presence-her bathing suit glows with the life she lacks-in the fenced-in void, a sort of pseudo hortus conclusus. Her surroundings are clean and well lit, safe and secure, but also ghetto-like in their insularity.

The suburbs are communities in which the American dream has been realized, but there’s little sense of communal togetherness in Greenfield-Sanders’s work: Her figures sit and lie in silence around the pool, aware of the sun rather than each other; it’s a strange conformity and a dubious hedonism. Robert Frost’s fence no longer makes good neighbors, but signifies mutual indifference enforced by rigid boundaries. Numerous filmmakers and photographers have made the self-deception of the suburbs their theme, suggesting that it has become a genre in itself. Greenfield-Sanders’s ultimate message is that the moralized American Landscape is no longer the great American wilderness of the nineteenth century but a kind of domesticated version of the outdoors, a sterile shell. This is American psychosocial realism with a cynical vengeance. 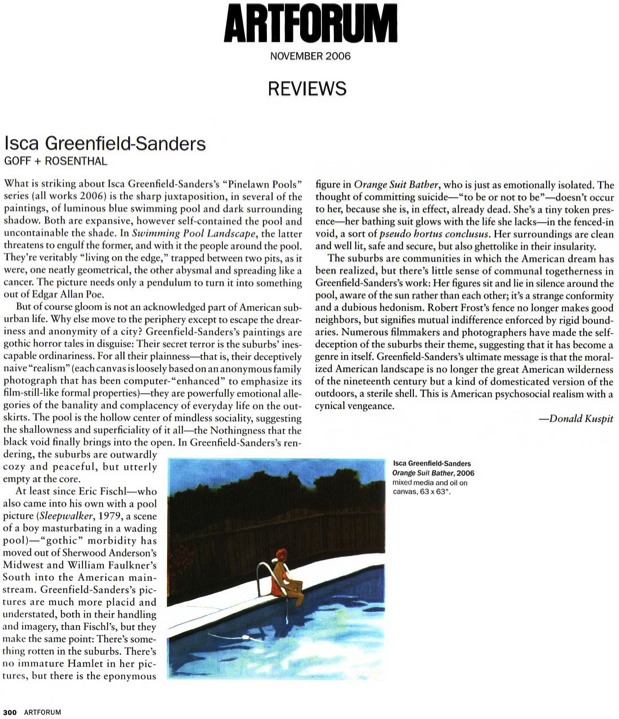