Bio Pic / The Story Behind an Artwork

This is “Light Leak III (Soccer),” 2010, an oil painting based on a photograph from the 1960s. This one came from a 700-slide lot I bought sometime in 2008; I purchase vintage archives on eBay. The soccer images were a thrill to find because I love working in series. Once you see this series of paintings in a room, it’s like, “Okay, these are the soccer paintings.” But in fact, the content of the paintings, the subject matter, is not really soccer. It’s really the problems inherent to the medium that the original images were captured in, which is film, and it’s about the process of overlaying or redoing that work as an oil painting. The soccer images suited my interest in figures in motion, and they had the color and the sort of art-historical references that I need to see in the source images before I can build them into paintings. For me, these figures in uniform, and in motion, recall Degas’s racing scenes.

Like all the paintings in this series, “Light Leak III (Soccer)” began as a 35-millimeter slide, which was scanned and printed, then reproduced as a watercolor, then scanned again and enlarged, and finally made into a painting. It’s a Warholian exercise in that the image is never allowed to die; it is used and absorbed and reused in different media. The final canvas is an oil painting with layers, under it, of digital manipulation and magnification, watercolor, and photography.

It’s a simple image. That’s why I’m attracted to it: It’s plain, it’s universal. Compositionally it has all the interest markers for me as a painter. The kinds of things that I was thinking about — and painting about — are what you see in this image: a lens flare with internal reflection, causing the ghost images. The figures themselves are painted with just enough paint, just enough information, to indicate what they are. One quarter of this painting is just bright, pure, white light. For me, that recalls Monet’s haystacks and his obsessive attention to detail, color, temperature, and light. This painting conveys a typical film flaw and memorializes it in paint. I saw something dark and beautiful in that veiling glare of light that rendered the figures ghostly and drained of expected color.

“Isca Greenfield-Sanders” runs at MCA Denver from October 15 through January 9, 2011. The artist is represented by Robert Goff Gallery and Haunch of Venison. 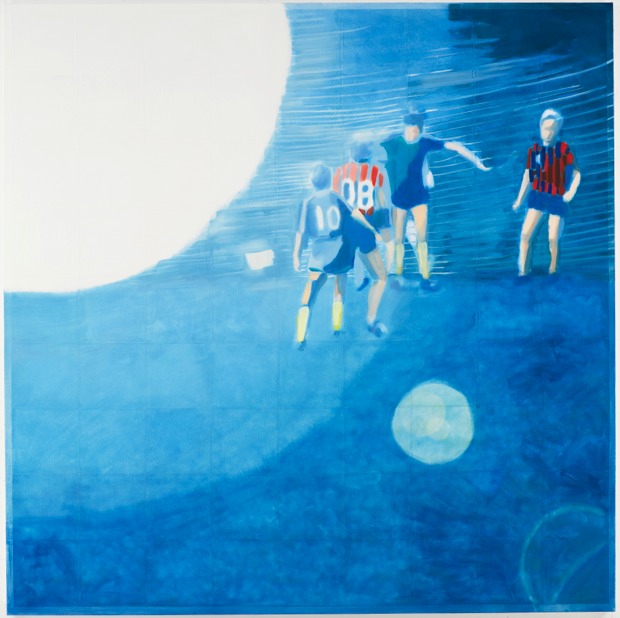