Painting the Shifting Sands of Memory by Stacey Goergen, 2016

Painting the Shifting Sands of Memory

Isca Greenfield-Sanders describes herself as a landscape painter, and at first blush, her luminous paintings and drawings are easily interpreted as the romantic compositions this characterization recalls. Her canvases seem vaguely recognizable, tugging at the viewer’s memory. They include people outdoors, often in scenes by the water or engaging in leisure activities, recalling a collective consciousness that at once seems specific, but by definition is very general. By understanding her working process and theoretical explorations, these landscapes can be better framed in a conceptual context. Examining the relationship of photography to painting, she refers to the passing of time, and the dissolution of film photography’s image making as a rarified, time-consuming, and relatively expensive proposition, while simultaneously equating this transition to memory itself. In a world where the proliferation of images is facilitated by technology and digital media, what is the value of a photograph and how does it relate to our recollection of a time and place? How does a painting, based on a photographic image, change this meaning?

Exploring these questions through her multi-layered artistic process, Greenfield-Sanders’ practice is clearly related to our own remembrance. “The integrity of memory is diminished the more you recall it,” she explains. “As you think about something over and over, you infuse it with details that did not exist. This relates to how I make my work. I start with a found 35mm transparency and end up with a large-scale oil painting. In between I change scale twice and change medium twice. I drag the original image through different incarnations, but by keeping the photographic scaffold, my viewers read it as within the realm of the real. Yet each turn I am eroding the photographic information.” The end result is an image pushed and pulled so that it is scarcely related to the original, softened through the process in a hazy palette of the artist’s own creation, much like each of our own memories.

Greenfield-Sanders developed her working system while majoring in Visual Arts and Mathematics at Brown University, and has operated within its parameters ever since. While based on an artistic process dating back to the Renaissance, using a drawing that is gridded and then enlarged to a painting, she’s incorporated current technology into her practice. To start a new series, she begins by sifting through hundreds of slides from the 1950—60s found on eBay, instinctively choosing images that appeal to her, often due to their resemblance to art historical antecedents or other universal characteristics. She scans, crops and digitally manipulates these images, moving figures and adding landscapes or details from different slides. The discarded, anonymous images allow her to work independently from personal intent or connotation, and free her to shape the raw data, “translating” slides into paintings. Printing her compositions she creates half tone ghost images that she paints over in watercolor and colored pencils. Scanning and increasing their size to either 35 or 63-inch squares, she then grids the image into 7-inch squares — the span of her own hand — and individually prints each square of the grid. Affixing the rice paper to canvas, she paints over the composite in oil. The final painting contains remnants of her process, the gridded image and palette shaped by the artist, and softened by the surface of the rice paper, leaving hardly a trace of the photograph on which it was based, a corollary to memory’s softening over time.

Her paintings, which have covered a variety of subjects including people on the beach, parachute jumpers and children playing soccer, have become less defined and more loosely painted over time. The large-scale painting Canoes, 2015, from her most recent series, is a translucent blue, pink and purple lake scene. A group of canoers paddle in the middle ground, while the water in the foreground, and the woods in the background, remain almost abstracted. As often happens, the artist was immediately drawn to the original slide because it reminded her of an existing artwork — in this case one of Winslow Homer’s many canoe depictions. She cropped the panorama, favoring one side where she found the figure groupings more interesting, and removed the detritus (garbage cans, ropes, and signage) from the background. The existing magenta colors of the slide were dark, and featured almost no green, so after printing her half tone digital composition on rice paper, she created a new color scheme for Canoes (Watercolor Study), 2015. 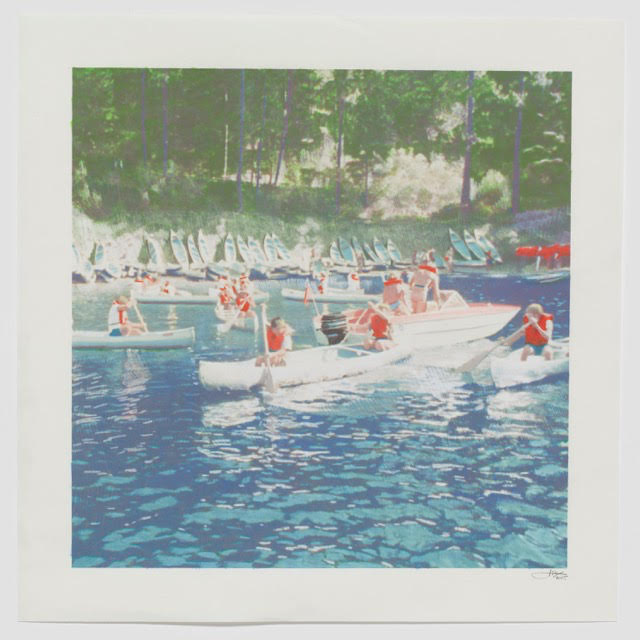 Here, the woods in the background are green, and the water is a deep lake blue. Compared to the final painting, the study is more evenly toned, with figures and objects that are more well defined. Her process itself alters the palette, reminding the viewer that over time certain elements of memory sharpen, while others fade. The study and finished oil are only two of over ten paintings based on this slide, and these multiple iterations help fuel her process. “One source image can be incredibly fruitful for me,” she explains. “I see no natural end to an image and that is important. It is like a feedback loop.”

Referring again to the many pieces of individual data that comprise memory, Greenfield-Sanders deliberately grids her paintings so that the individual boxes can be seen as stand alone compositions. This framework partially comes from her interest in Delft tiles, which can be seen either individually or as a whole, that she admired growing up in a home of Dutch ancestry. 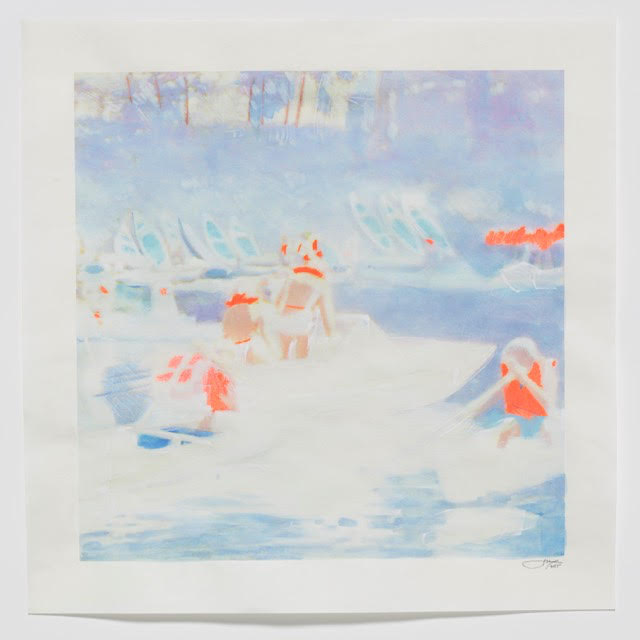 Canoe (Detail), 2015, magnifies a tile from the center of Canoes, illustrating a woman viewed from behind while standing in a boat. This watercolor, at 14-inches twice the size of original tile, stands on its own as a finished work. Similarly, when considered alone, the 14-inch square Canoe (Wave Detail), 2015 . 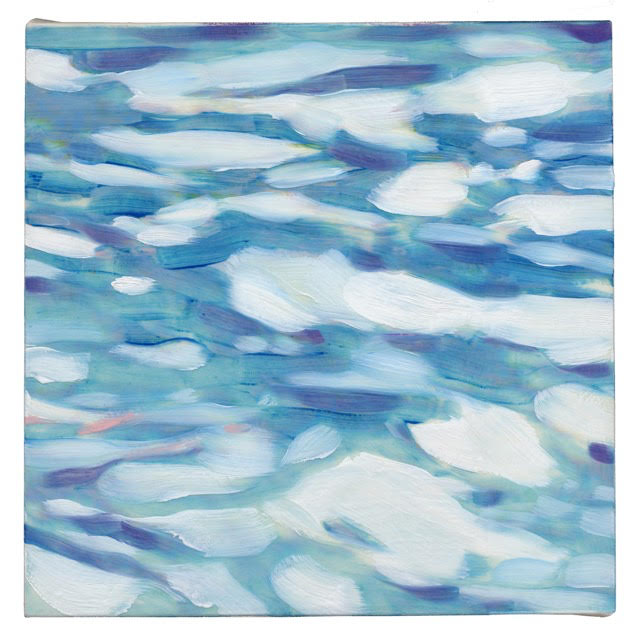 is a broadly stroked abstract oil painting of blues, purples and whites. However, within the grid of the painting, it represents a block in the abstracted water. Taken apart, each of the 81 pieces of rice paper in Canoes is its own painting. While they can be seen separately, collectively they have a different meaning that comes into focus when reconstituted.

In addition to her working process, the subject and content of her paintings also refer to memory. The scene in Canoes is immediately recognizable as a pleasant summer day, reminiscent of a day at camp or with family on the water. The casual conversation, lilt of the paddle, bright orange of the life jackets, and the pleasant color balance seem to strike a cord, even if one’s never been in a canoe or on a lake. Greenfield-Sanders’ ability to create a moment possibly remembered adds another layer to her exploration of the fallacy of remembrance. The vaguely reminiscent scene triggers a sense of recollection, but it may not have any bearing on one’s own past.

Greenfield-Sanders’ work is often described as nostalgic because she employs slides from the 1950—60s to make emotive work that explores concepts of memory. In reality, the painter has chosen these decades mainly for practical considerations, including the content and condition of the found slides. Film speeds were slower, so pictures were usually taken outdoors, providing abundant choices for landscapes. These images are also largely free of logos and identifying signage, lending a more timeless, universal feel than in more recent years. She has also found that slides are better preserved than film negatives, partially because they were often stored in metal boxes. From a visual point of view, the artist is also drawn to the beauty of the film stock’s light quality.

If anything, Greenfield-Sanders might be nostalgic for the practice of photography itself. “I love thinking about photo-graphy,” she says, “I’m completely preoccupied by it, except that I’m a painter. Plenty of painters use photography as a starting point, and I do as well, but I also take photography as my subject.” In her lifetime the medium of photography has been entirely transformed. Film and slides are no longer widely used, and digital photography has made shooting and altering an image commonplace. She uses the original slide to create a structure based on a true image that is someone else’s actual memory. The fact remains that the artist digitally manipulates the image to make it her own before she even puts it through her arduous process. She is not appropriating these images, rather using them as a source for anonymous data, so that once selected and transformed by the artist, it becomes the launching point for multiple versions of the same image. Her use of photography is also related to the subjectivity of memory, as the artist repeatedly works with an image and further diminishes its accuracy as she highlights and masks specific elements.

While Greenfield-Sanders insists she has no particular affinity for the seaside, she recounts how she recently came across a family video shot at the beach, and was surprised at her strong and layered emotional response. “In the moment, I was struck by my personal connection to the people, seeing my family members some of whom are gone. Being confronted with specific evidence of a habitual trip down to Miami Beach that had become an amalgam of memories mostly informed by photos.” She continues, noting that the video could have been one of her paintings come to life: “I couldn’t believe how beautiful video looked to me. It had the classic problems of terrible sound (wind on a beach) and the lens was fighting the sun’s reflection on the water. During the entire piece the lens attempts to auto-expose, which blows out the image and distorts the color, the figures and the landscape. My father was manually focusing by zooming all the way into my sister’s eye, making sure it was sharp, and then pulling back out. He would then quickly pan to the water, a group of figures in the ocean, a prolonged still.” For an artist who has repeatedly depicted bathers culled from found photographs, with no specific visual memory of her own, this reminder of time past was a surprise. “Did I see it then as a child on the beach?” she asks, “We all did, and isn’t that the point?”

Beginning with vintage slides, Greenfield-Sanders breaks down photographic images, and rebuilds them as her own. Putting the image through various incarnations, she grids and paints small fragments, reconstituting the “details” to a whole in a manner similar to memory’s construction. The vague familiarity of her anonymous landscapes re-enforces her exploration of remembrance as manifested through a complex working method. The original photographs, by definition, are someone else’s memories, leading the artist to question the nature of recollection and the truthfulness of photography. The medium’s relationship to reality and the role it plays in our own memories become integral to her multiple studies, watercolors and paintings of a single image. The various outputs become about repeatedly working with form itself. As the artist stresses: “My work is not personal, the memories are found, and the emotions imbued are universal.” Translating elements from unknown family snapshots into paintings with more universal, contemporary concerns, Greenfield-Sanders adds a complexity to her works belied by the beauty inherent in their aesthetic appearance.

Stacey Goergen is an independent curator and writer based in New York City.  Abrams recently published her co-authored book on artist collections, Artists Living with Art. She was previously the Director of SmartSpaces, a non-profit organization that installed contemporary art in vacant urban spaces.  Prior to that she worked in the curatorial department at the Whitney Museum of American Art.  Stacey has written essays for Whitney Museum catalogues and gallery publications, and her work has appeared in The Wall Street Journal, The Sunday Times, Gotham, Aleim Magazine, and Hamptons, among others.