International
GALERIE KLÜSER 2
Munich
Isca Greenfield-Sanders’s work is intriguingly deceptive. What seem like snapshots, blown up and painted over, hide a process that addresses issues of family and memory. Looking at these compelling new works, the viewer becomes immersed in someone else’s reminiscence. A family is seen in a glowing halo of nostalgia: a chubby girl in a baby swing, a family get-together, father and son on the lawn. But the black-and-white memories have been gussied up with garish hues that contrast with the 1950s aura.
The large-format works were constructed from smaller squares pasted to canvas and assembled like mosaics. The process is laborious: photos are scanned, and, using a computer, the artist isolates particular elements from them to construct her own “remembrance.” This falsified memory is printed on rice paper and colored with pencil and watercolor. Those images are then scanned and printed on the paper squares, which are painted over with oils. In some instances, a seam bisects a face, or a vital limb has been cropped out.
The characters often reappear, arranged in new positions with different-colored clothes. Some titles, such as Silver Beach (Alice and Stinky), are misleading; the figures are not the artist’s relations. The source images are like found objects-someone else’s family history discovered and renewed like a piece of furniture from a flea market. The result is similar to the multilayered workings of memory itself: a family legend invoked so often that it is “remembered” even if not directly experienced; an event from one’s infancy told so repeatedly that a dim recollection appears; a photograph seen so many times that one becomes convinced of having participated in the event. 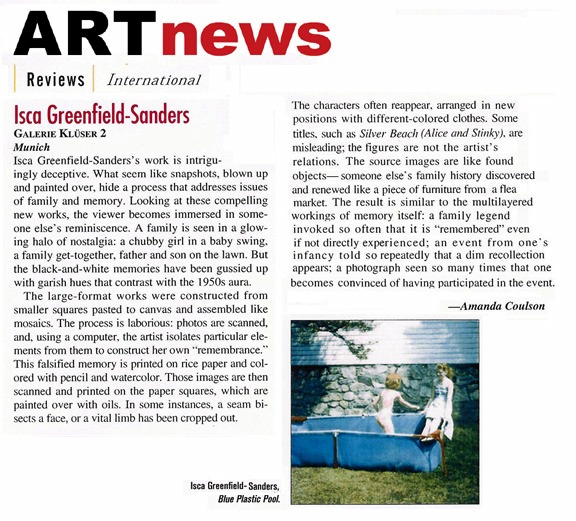