by MEREDITH MENDELSOHN | January 2009 In this lively and in ways disturbing show, Isca Greenfield-Sanders fixated on the parachute.  The mostly mixed-media-and-oil paintings, as well as the drawings, were based on World War II and Korean War photographs.  Nevertheless, the artist’s use of bright sumptuous hues was more suggestive of leisure activity than of warfare.

These works had the charm of Antoine de Saint-Exupéry’s aeronautic drawings in Le Petit Prince, a book that Greenfield-Sanders acknowledges as an influence.  But her perspective is more complex.  The figures don’t seem free by flight; rather, they appear paralyzed by it.  In images from the “Orange Parachute” series (2008), for example, a body hangs from ropes like deadweight, and the viewer can sense its heaviness and immobility as it sinks.

One of the more intriguing paintings, Gold & Pink Parachute (Gold), 2008 shows a figure under a gold parachute.  Situated in a field of gold acrylic paint, the body seems stuck in midair rather than held aloft by the parachute.  The work could also be viewed as a reference to golden parachutes, corporate greed, financial collapse, and a desire for escape.

Another series of three paintings, “Parachute Class” (2008), showing a team of men in crisp white attire against a green lawn and bright blue sky, disengaging a figure from a parachute, is at once reminiscent of an Alex Katz Pop landscape and a Beatles album cover.  But Greenfield-Sanders admits some ominous details into her candy-colored scenes.  In Pink Parachutes (Blue), 2008, the figure’s head hangs down in such a way that we can’t tell if it’s dead or simply gazing at the ground.  A dark black-and-white work showing a parachute descending at night most clearly evoked the peril of wartime. 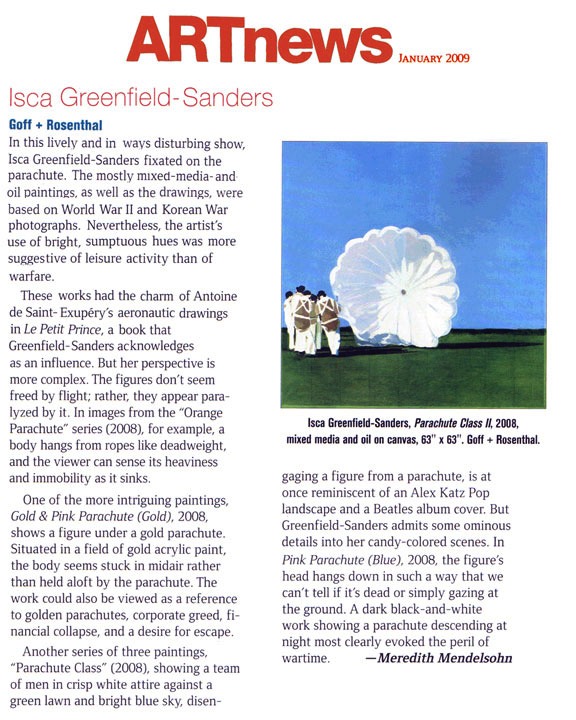